The Flame of the great victory

Victory Parade as a symbol of Russia’s greatness 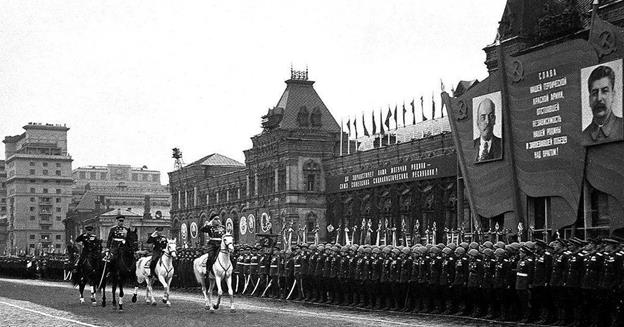 Every year we celebrate one of the greatest holidays in our country. It is

Victory Day. It is not simply a holiday, but it is glorious day with remembrances, tears, meetings of veterans & of course Military Parade.

I think this event is of great significance not only in our country but also all over the world. The most important parade took place in 1941 at the very beginning of the World War II

There are very few surviving veterans left, but they are always with us, their memories are alive. I read memories of the veterans who took part in that legendary parade on Red Square. That’s what they say, “The parade took place in Moscow on November 7, 1941 when Nazi troops were only a hundred kilometers from the capital. It began at eight in the morning - 2 hours earlier than the originally scheduled date, which was announced to the participants in the last hours before the march.” 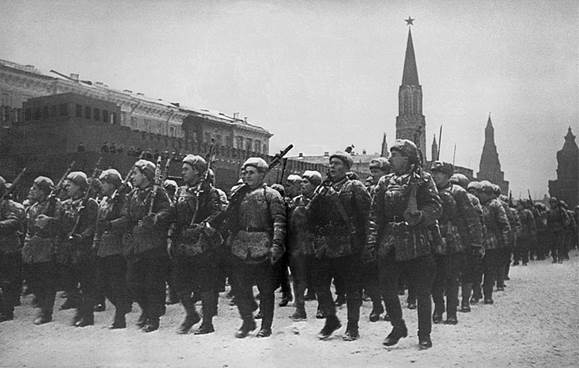 The parade on Red Square on the seven in November 1941 (fig.1) was carried out by the Soviet command literally under the nose of the advancing enemy, who earlier promised to hold their own triumphal march in Moscow on that day. This event has no analogues in the whole world stories wars. The parade had enormous significance. The parade was inspected by the commander of the Reserve Front, Marshal of the Soviet Union Semyon Budyonny (fig 2) 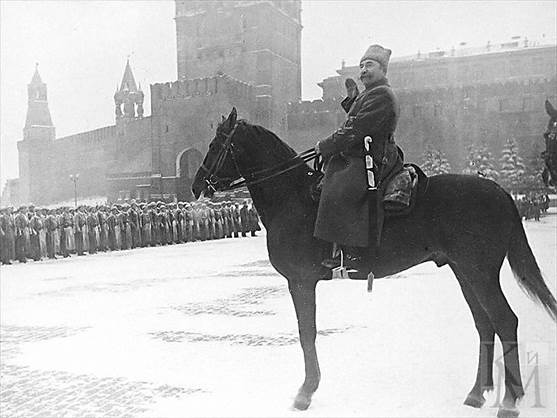 To give the march an atmosphere of special solemnity as an additional measure for raising the morale of its participants and residents of the capital, all the stars in the Kremlin towers were uncovered and lit.  The participants of the parade went straight to the front. Muscovites saw soldiers off to the battlefields with fascists. 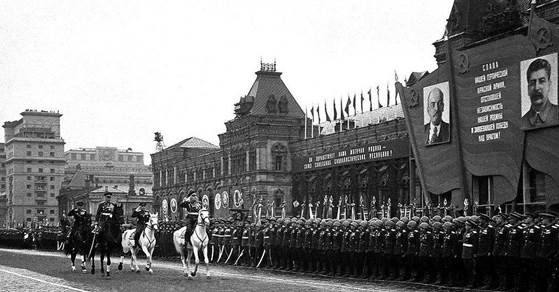 Twelve combined regiments were formed to take part in the parade (ten from all the fronts operational at the end of the war, one from the Navy and one from the People’s Commissariat of Defense). Each regiment comprised over a thousand of the most distinguished combatants, including Heroes of the Soviet Union and cavaliers of the Order of Glory. The commanders of fronts and armies marched in front of the regiments (fig 4) 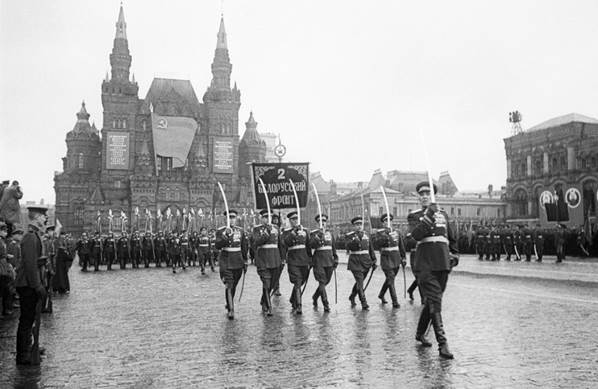 At the end of the parade, Soviet soldiers were carrying the standards of crushed Fascist formations, lowered to the ground. Coming level with the Mausoleum and turning with precision to face it, they threw the enemy banners down at the foot of the Mausoleum 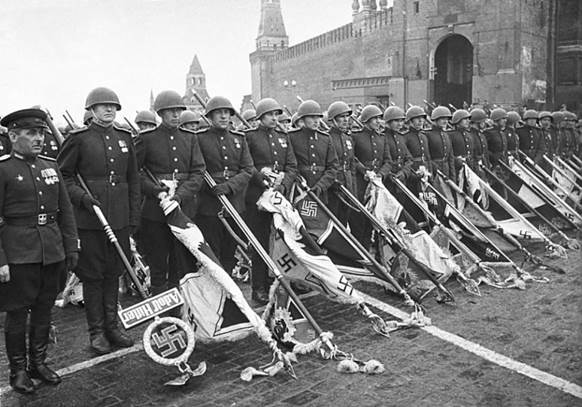 The decision to hold a parade in honor of the victory over Germany was made by the Supreme Commander Joseph Stalin shortly after Victory Day - in the middle of May 1945.

Nowadays Russia is surrounded by unfriendly countries whose great desire is destroy military power of our country. It is a pity that alliance countries of NATO interfere into home affairs of many countries of the world trying to establish their own regimes, like in Iran, Syria, Iraq & especially it concerns Ukraine. The bosses from NATO command here, they kill & exterminate civil population, make provocations, support Ukrainian nazists.

Russian President Vladimir Putin quite rightly pointed out in his speech dedicated to the anniversary of Victory Parade 24 June 1945, ​​“We should not forget about this strong parade. Historical memory is the key to a decent future for Russia. We must learn from the heroic generation of front-line soldiers the main thing - the habit of winning. This habit is very necessary in our today's peaceful life. It will help the current generation to build a strong, stable and prosperous Russia. I am sure that the spirit of the Great Victory will keep our Homeland in the new, XXI century as well.”