Specific objectives : ( Learning outcomes that can be tested for knowledge)

This is what you need to keep ready for the class :

Explain about shells : Depending on how an animal makes its shell, some may be smooth where as others may be rough; some would have no designs other would have patterns. They also have different colours. The colours are also because of the way the animal secretes substances for making its shell.

These soft bodied animals have a foot that is ‘muscular’, meaning made up of muscles,no bones; how the foot comes out and how it is used in locomotion. ( Ref to Phylum mollusca for locomotion)

Print out the pencil images of molluscs given and ask them to choose any one.Draw and mark the parts.
Give the questionnaire to assess what and how much they have learnt.
Pencil images for drawing, colouring and marking parts or taking with you if you are going to conduct this as an outdoor class on a beach. 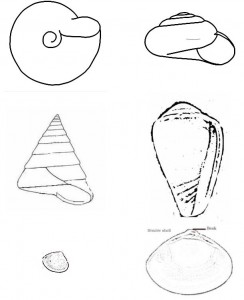 3. In a cockroach the wings are present on the ———-
a) dorsal side
b) ventral side
c) near its neck.

II. 1. Why do animals make shells?
2. What do you mean by the term Univalve?
3. what helps animals make colourful shells?