2. She found the house easily.

3. She was very upset that everything was out of order.

She saw a lot of sightseeings.

Now we are ready to start.

You have 30 seconds to complete the task. (Pause 30 seconds.) Now you will hear the text again.

Act out with your partner.

Pupil A – You call your friend and you’d like to invite him to the concert. But you friend isn’t at home. Ask his/her sister (brother) to take massage for your friend.

Task 1.Fill in the blanks with the following words. Use only one word in each space.

I am in Australia. It's great. A lot of sunshine and fresh air, parrots and other fantastic birds, warm water and beaches. You are surprised to get my message, aren't you?

Now I and 49 other ... winners will travel ... the world. I enjoy visiting new places and finding new friends all over the .... I will send you postcards from the countries which we are going to visit.

The word in capitals above each of the fol­lowing sentences can be used to form a word that fits suitably in the blank space. Fill each blank in this way.

They have already discussed this important ... problem.

They study ... and French at school.

He is a ... scientist. His ideas are new and original.

Why does the computer useful nowadays? Write your own opinion. Write 50-70 words.

It is the same to drive a car in England as any other country. To change a car wheel in the wind and rain is as pleasant outside London as outside Rio de Janeiro. The English car driver is different from the European car driver so there are some things you must remember when you drive in England. Let me give you three examples.

One. In English towns you must drive at thirty miles per hour. The police watch carefully for drivers who go too fast. Remember: the police usually drive white cars, two policemen sit in each car and you can read the word POLICE in large letters on the front and back of these cars.

Two. England is the only country in the world where you must leave your car lights on when you park your car at night in a busy street with lots of street lights. When you come back to the car, you cannot start it again. The car will not work; it's dead. But it is wonderful! There are fewer cars on the road and the number of road crashes goes down. This makes driving on roads safe.

And three. If you park your car in the City or the West End of London, two or three policemen will run up and tell you «You cannot park here! Move along!» So where can you park? The policemen don't know. But, they are right. Cars need to move, and move fast, not stop and make life difficult for people in the street.

Now do the tasks.

1. In English towns you can drive your car as fast as thirty miles per hour.

2. It is very easy to recognize a police car in England.

4. The policemen do not always know where you can park your car.

2. Контроль навыков говорения. Act out the dialogue between these conference participants from different countries. Introduce yourselves and share some information about the countries you come from.

The word in capitals above each of the following sentences can be used to form a word that fits suitably in the blank space. Fill each blank in this way.

The girl was awarded a prize for her English ... of the poem.

Hong Kong is famous for its quick econo­mic ....

At the award ceremony the ... collected a gold medal for his excellent Russian.

Her last ... in the theatre was successful.

The National Park is visited by thousands of ... every summer.

We'll discuss this important question at the ... tomorrow

Read a sentence and write another sentence with the same meaning. Use the Passive Voice.

Why do people study foreign languages? Why do you study English? Is it necessary? Write 50-70 words.

2. Jeremy took the photo before he went out.

3. Jeremy thinks the now his clot hers looked good.

4. Jeremy’s parents were surprised to see him.

Now we are ready to start.

In 1975, when I was about fourteen, I went to my first school disco. The other day, I found an old photo of myself, which my sister took before I went out. It's awful! My hair is really long and curly (now I wear it short), and the clothes are so horrible that I'm surprised my parents didn't make me stay at home. But they actually drove me to the disco! I was wearing a brown shirt with a huge collar and a white sleeveless jumper with a big green stripe across the front. I also had dark green flaredand big platform shoes. I thought I looked really cool and stylish at the time, but now it seems like a fashion nightmare!

You have 30 seconds to complete the task. (Pause 30 seconds.) Now you will hear the text again.

School. Have you got some problems at school? What are they?

Complete each sentence with one of the words below.

In Russia education is compulsory between ages of 6-7 and 15 years. There are different types of secondary schools in the country. Most of them are state schools where ... is free.

But some parents want their children to attend ... schools which aren't free.

Children have to ... school from Monday till Friday. In some schools they ... to wear uniform. In others they are ... to wear what they want.

The discipline isn't very strict. But if a pupil... badly the teacher can ... the child. Of course, the ... isn't severe. The teachers want their pupils to stay out of ... and always do their best.

Task 2. Write another sentence with the same mea­ning using the Passive Voice.

A. The speaker has an opportunity to do the favorite sport again.

B. The speaker has some problems in doing sport.

C. The speaker goes in for different kinds of sport.

F. The speaker likes tea more than the game.

I like playing cricket. I've actually got into a school team this year — I'm not brilliant but it is good fun to have a couple of good games though, as often happens in cricket, twice the match was a draw. But the best part of playing school cricket is a cup of tea in the afternoon.

In my spare time I do a lot of sport: on Monday mornings I get up at 630 and go jogging, on Tuesday and Thursday nights I do yoga, on Fridays I go swimming, on Saturdays and Sundays I play tennis. There are good facilities in Cornwall.

I want to become a professional boxer. I've already won a few competi­tions. I'm lucky to go to a newly-built college in Birmingham. There is a well-equipped gym in it. We have good teachers. One of our teachers was an ama­teur boxing champion and he helps me a lot with the technical side of boxing.

I like skiing best of all. I have skied since I was a child and our family lived in Switzerland, my Dad had a job there. My parents were devoted skiers and they took rny brother and me to ski every weekend. Then for some years I wasn't able to ski because we returned to the south of England. But since I came to study in Austria, I've gone skiing and I always have a wonderful time. It's really great to ski at a full speed down the hill. Try and see yourself.

Of the three sports — swimming, rowing and sailing —I like rowing best, because it is the easiest to continue during the winter, when the water is too cold for comfortable swimming, and the sea is often too rough for sailing. Even on the coldest days I can row; only ice in the water or thick fog stops me.

This is the end of the task.

You now have 15 seconds to check your answers.

Invite your friend to do some sports with you. Give your reasons on why you’ve chosen a certain sport. Write 50-70 words.

Task 2.Complete the sentences: put the adjectives or adverbs in brackets in appropriate form.. 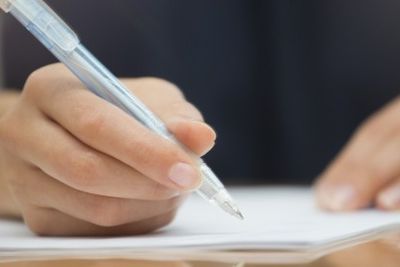