London, city, capital of the United Kingdom. It is among the oldest of the world’s great cities—its history spanning nearly two millennia—and one of the most cosmopolitan. By far Britain’s largest metropolis, it is also the country’s economic, transportation, and cultural centre.

With a coverage area of 1,579 sq km (610 sq mi), Londinium (historical name of London), was founded by the Romans as a communication centre when they occupied Britain in 43 AD. Initially London was in the form of a small village which was situated near River Thames. Along with the population, the city also grew geographically to what we see today. According to a population census of 2001, the population of UK’s capital was 7,172,036. With an oceanic climate, London’s reputation has been emerged as a rainy city. In summers, the average temperature is 26 degree C whereas in winters, the chilly and frosty temperature falls below -4 degree C till -14 (lowest temperature on record).

London is a binding of past and present, which is why it is considered to be a great tourist attraction. Uncountable landmarks of London are beautiful and astonishing enough to stay in the spotlight.

Besides the historical background of London, there are several other reasons that make this place eminent among the rest of the capitals. Out of 32 boroughs of Great London, 20 are declared as outer boroughs while 12 are legally known as inner boroughs. With 195 villages, a good percentage of population is living in the rural  area of London. The city is famous for being a hub of Airports and besides having eight airports, it also grabs attention by being the biggest airspace city in the world. With 270 tube stations, it again places itself in the limelight.

Forty three universities of London have made the city into a knowledge ground. It was estimated in 2008 that approximately 412,000 of the population was of students which include 118,000 postgraduate students, while 287,000 were registered as undergraduates. Another astonishing factor is that 97,150 students studying in London are from foreign backgrounds.

Food and Eating-out in London

The presence of diverse cultures in London has helped a variety of international cuisines to introduce themselves. Along with British food, international cuisines are also admired by Londoners - something that can be proved through the success of restaurants like Nando’s, Mc Donalds, Pizza Hut, Wagamama  and several others.

London is also known as a shopping district; all possible items are obtainable which are admired due to their quality and durability. The presence of huge shopping centers in the UK’s capital gives the city a chance in not only attracting the locals, but tourists as well. Shopping plazas like Arcadia Centre, Blenheim Centre, Brent Cross Shopping Centre, Broadway Shopping Centre, Whiteleys and Gloucester Arcade Shopping Centre are worth a visit. This includes Oxford Street - which is famous for having the best departmental stores.

A good percentage of tourists prefer visiting London because the city contains uncountable sites and attractions due to its rich historical background and modern culture. Places like River Thames, London Eye, Madame Tussaud, Victoria and Albert Museum, Buckingham Palace and Trafalgar Square took no time in making a place for themselves in the list of mesmerizing landmarks and attractions. 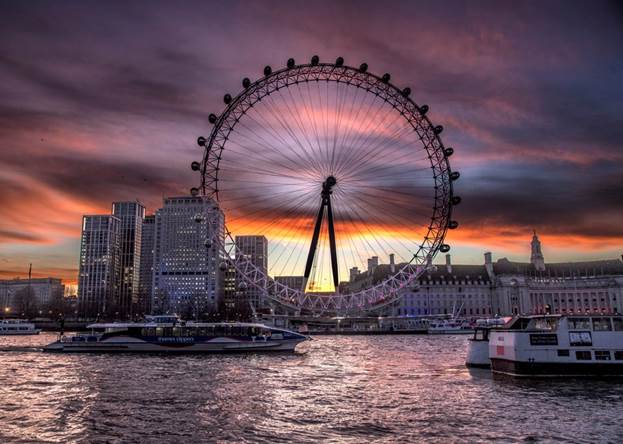 London is known all over the world for granting quality higher education. The city has also fortified itself as having the best centers for research and teaching. Among 43 universities; you will be able to locate 5 top class medical schools, along with London Business School that was ranked as the best ranked institute in 2010, and University of the Arts London which is famous for being an outclass institute of Performing Arts, design, fashion and communication.

Some facts about London

Every year at Christmas on Trafalgar Square in London, a Christmas tree is set up, sent from Oslo. It is a token of gratitude for the help rendered to Norway during the Second World War.

The entrance to the car in the center of London in the daytime is paid, and it costs, by the way, a lot – ten pounds sterling.

In London, there is a statue of George Washington, but it was installed on land brought from the US, because Washington during life claimed that “his foot no longer step on the English land.”

The famous London “Big Ben” is not a tower, contrary to the widespread myth. “Big Ben” is the bell tower established there, and the tower itself is called “Elizabeth”.

Under London, there are twenty rivers hidden in the pipes.

The codebook for ships entering the London harbor still allows the Tower Constable to demand from each ship for a barrel of rum as a duty.

Londoners speak more than three hundred languages, which makes London the most multilingual city in the world. However, in English it’s all the same, of course, they say everything.

Local law forbids you to catch a taxi in the streets of London, if you are infected with a plague.

All London buses became red in 1907. Before that, they were painted in different colors.

It lives about a third less than the population in Moscow, and almost fifty times more than in Paris.

In one of the museums in London, a collection of things forgotten by passengers in the London Underground is stored. It includes such extravagant things as a human skull, a samurai sword, a coffin and a fugu fish.

London Heathrow Airport accepts and sends international flights more than any other airport in the world.

In the fire of 1666 in London, about 70 thousand people were left without a roof over their heads, despite the fact that then the population of this city was only 80 thousand.

In London, opened the world’s first zoo. This significant event happened in the distant 1828.

There are more than a thousand streets in London.

Contrary to popular belief, London is not a rainy city at all. On the contrary, it is one of the driest in Europe. But there are a lot of overcast days here.

Buses in London go round the clock.

The cheapest transport in London is a bicycle. You can hire it on almost every street, and daily rent will cost half the price of the shortest subway ride.

From London to Paris, you can reach the train in just two hours.