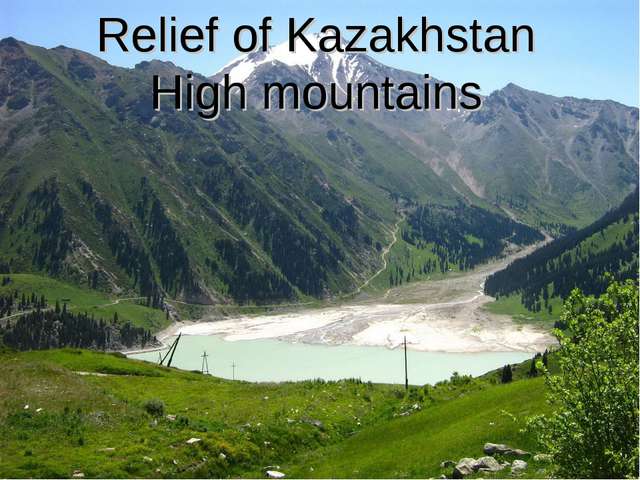 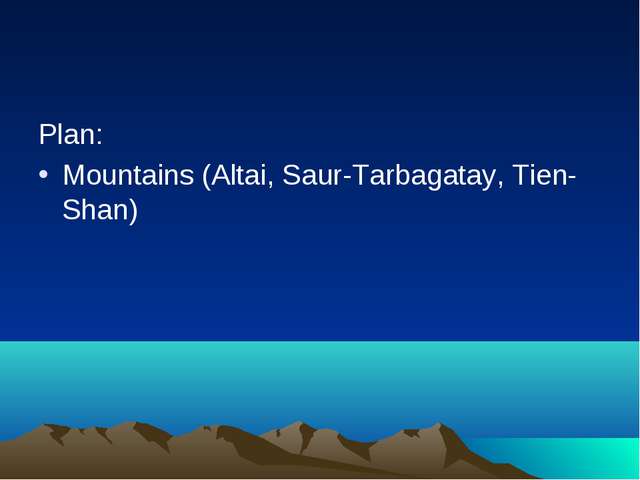 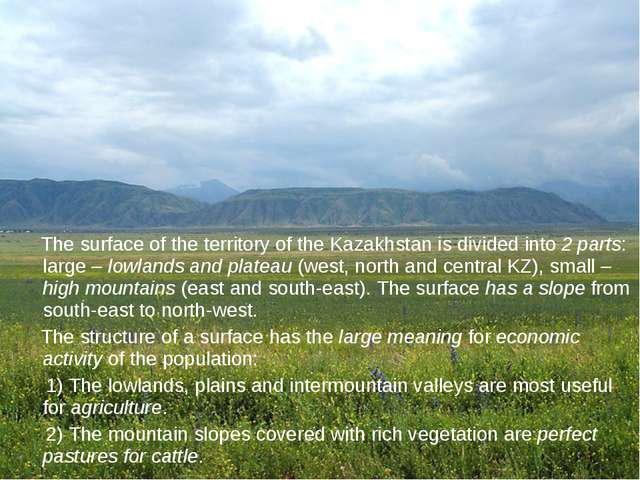 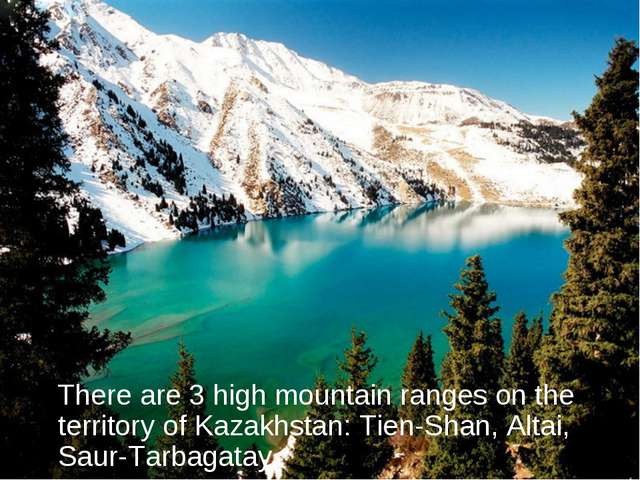 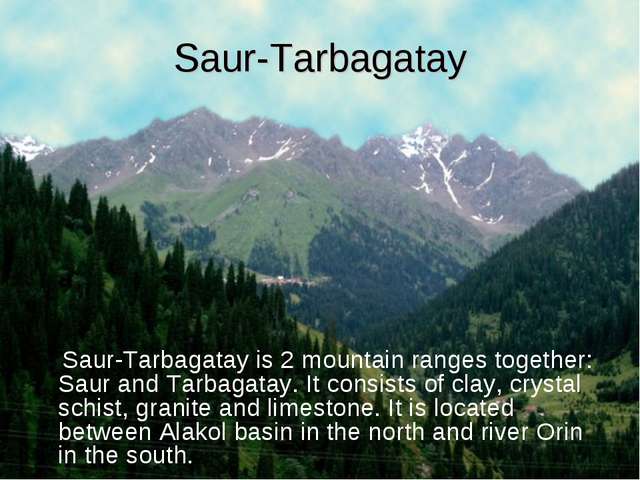 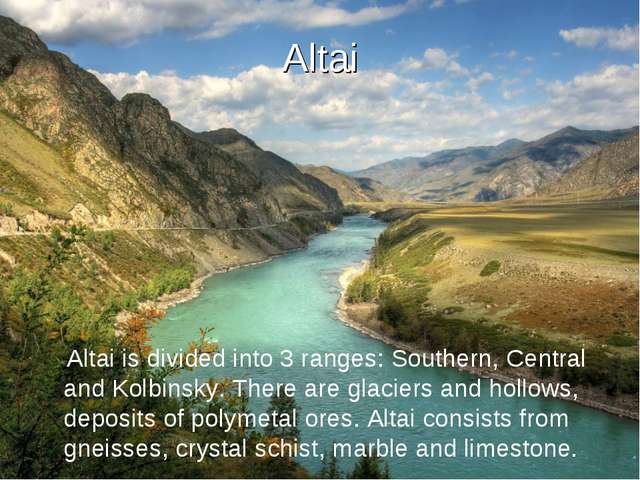 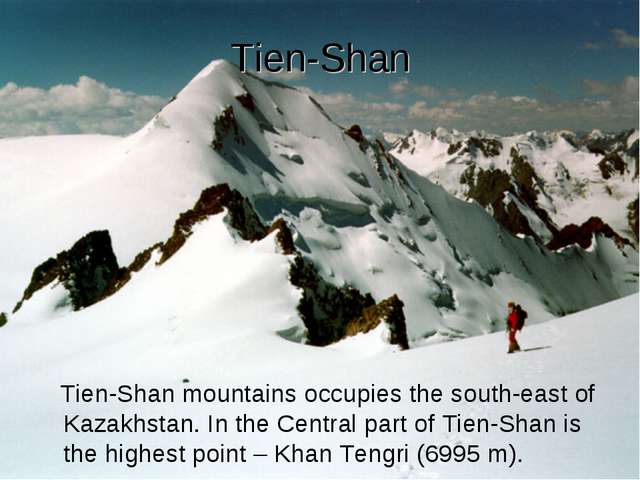 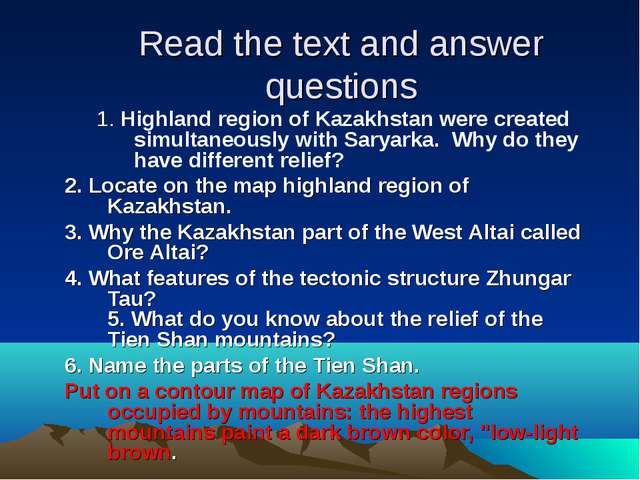 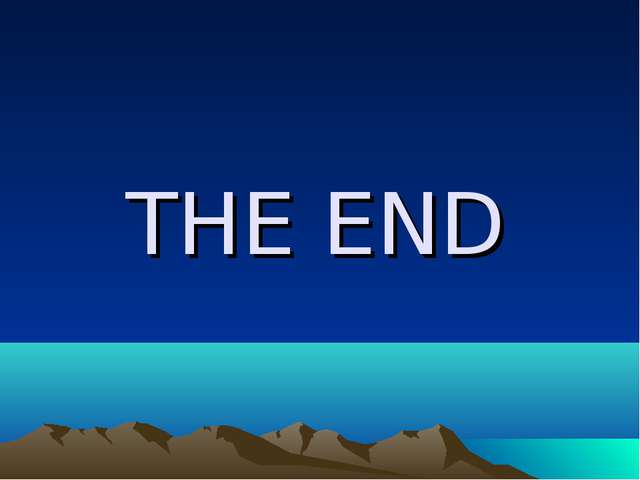 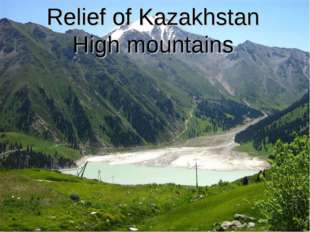 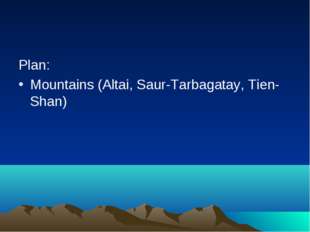 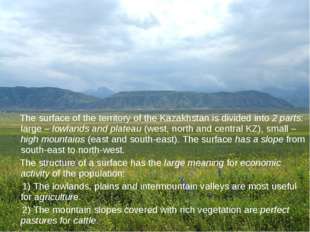 The surface of the territory of the Kazakhstan is divided into 2 parts: large – lowlands and plateau (west, north and central KZ), small – high mountains (east and south-east). The surface has a slope from south-east to north-west. The structure of a surface has the large meaning for economic activity of the population: 1) The lowlands, plains and intermountain valleys are most useful for agriculture. 2) The mountain slopes covered with rich vegetation are perfect pastures for cattle. 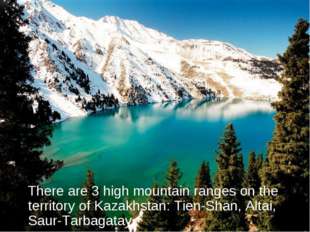 There are 3 high mountain ranges on the territory of Kazakhstan: Tien-Shan, Altai, Saur-Tarbagatay. 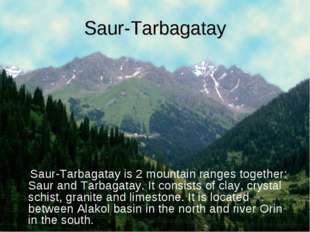 Saur-Tarbagatay Saur-Tarbagatay is 2 mountain ranges together: Saur and Tarbagatay. It consists of clay, crystal schist, granite and limestone. It is located between Alakol basin in the north and river Orin in the south. 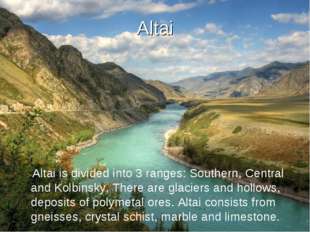 Altai Altai is divided into 3 ranges: Southern, Central and Kolbinsky. There are glaciers and hollows, deposits of polymetal ores. Altai consists from gneisses, crystal schist, marble and limestone. 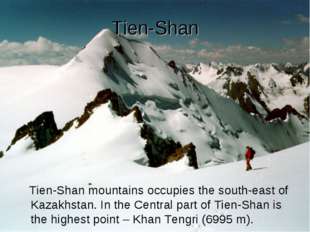 Tien-Shan Tien-Shan mountains occupies the south-east of Kazakhstan. In the Central part of Tien-Shan is the highest point – Khan Tengri (6995 m). 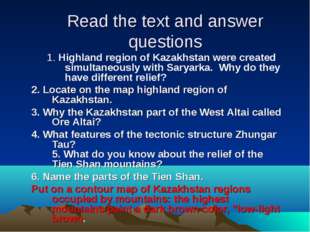 Read the text and answer questions 1. Highland region of Kazakhstan were created simultaneously with Saryarka. Why do they have different relief? 2. Locate on the map highland region of Kazakhstan. 3. Why the Kazakhstan part of the West Altai called Ore Altai? 4. What features of the tectonic structure Zhungar Tau? 5. What do you know about the relief of the Tien Shan mountains? 6. Name the parts of the Tien Shan. Put on a contour map of Kazakhstan regions occupied by mountains: the highest mountains paint a dark brown color, "low-light brown. 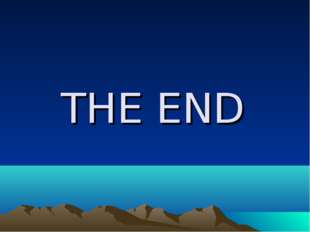 2. Locate on the map highland region of Kazakhstan.

3. Why the Kazakhstan part of the West Altai called Ore Altai?

4. What features of the tectonic structure Zhungar Tau?
5. What do you know about the relief of the Tien Shan mountains?

6. Name the parts of the Tien Shan.

Altai is the part of the largest mountain system named Altai-Sayan Mountains, the borders of which extend from Zaisan Lake to Baikal Lake. Kazakhstan has only its south-western part. The southern border is the basin of Black Irtysh River and Zaisan Lake, and the western border is Kalbinsky Ridge. According to the relief peculiarities, Kazakh Altai is divided into three areas: Southern Altai, Rudny Altai and Kalbinsky Ridge.
Southern Altai is located between Bukhtarma River in the north, Zaisan Lake and Black Irtysh River in the south. Irtysh valleydivides it from the western side from Kalbinsky Ridge. In the east it borders upon Ukok plateau. To the west and south-west from this place there are two chains of mountain ridges. They are divided by Kurchum and Karakoba rivers. Mountain ridges Tarbagatai (2739 m), Sarymsakty (3373 m), Naryn (2400 m) enter the northern mountainous part, and ridges Southern Altai (3483 m), Sarytau (3300 m), Kurchum (2644 m) form the southern part. Between ridges Azutau and Sarytau on the height of 1449 m there is Markakol Depression. High part of this territory in the east, gradually sloping towards the west, turns into the hilly area. Between the mountain tops you can meet small shallow marshy lakes. The western border of Southern Altai goes through the mountain chain of Kholzun. On the state border of Kazakhstan with Russia there is the highest ridge of Altai - Katunsky. Its top is Muztau (4506 m).

Western, or Rudny Altai comes into the territory of Kazakhstan with the western branches of Altai Mountains. Rudny Altai consists of Ulbinsky (2300 m), Ivanovsky (2775 m), Ubinsky (2100 m) mountain ridges, which are located on the north-west of Southern Altai. They stretch from the mountain ridge Katun and Ukok upland.

The eastern part of Western Altai is greatly divided and represents high-mountainous area, on the tops of which there is eternal snow and glaciers. In the depths of Western Altai a lot of natural resources can be found: copper, zinc, stannum, lead, tungsten, silver, gold and other metals. That is why Western Altai is called Rudny Altai (Ore Altai).

Kalbinsky Ridge is the continuation of Altai Mountains and it stretches for 400 km to the west from Yertys River. The highest point is Saryshoky (1606 m). To the west the ridge gradually declines and merges with Saryarka.

Saur-Tarbagatai together with the neighbouring ridges forms the single mountain system. It is the continuation of Saryarka in the east. Saur-Tarbagatai is located between Zaisan basin in the north and Alakol basin in the south. Saur’s highest point is Muztau (3816 m). On the territory of Kazakhstan there is only its northern slope. On the tops there are glaciers. Tarbagatai in comparison with Saur is lower but longer, it stretches for 300 km. The highest point is Tastau (2992 m). There are no glaciers on the tops.

Zhungar Alatau is located in the eastern part of Kazakhstan and it has continuation from the west-south-west to the east-north-east along the border of Kazakhstan and China between Ili River and Alakol Lake. On the east it is delimited with Zhungar Gates from the ridges of Barlyk and Maily located on the territory of China, on the south it is separated from Tien Shan by the Valley of Ili River. Total length of Zhungar Alatau is about 400 km.
Like Saur and Tarbagatai ridges, Zhungar Alatau occupies the intermediate position between Tien Shan, the typical Central Asian mountain system, and the mountains in the south of Siberia.
The system of Zhungar Alatau consists of several parallel high chains; the major of them is Severny ridge, the longest. It stretches in the north accompanied from the northern side by small and short front ridges. South-western branch of Severny ridge is Karatau ridge. Deep tectonic depression occupied by Koksu River separates the southern group of ridges from Severny Ridge: Toksanbai, Bedzhintau and Tyshkantau, which join with the branches of the Chinese ridge Boro-Horo. Toksambai and Bedzhintau ridges are connected to the main northern chain by means of the bridge that serves for water separation between the upper courses of Koksu and Borotal rivers.
Average height of Zhungar Alatau is 3580 m. Main ridges of Zhungar Alatau rise above 4000 m, the northern, main chain rises up to 4560 m (Semenov-Tien-Shansky Mountain in the heads of Bolshoi and Malyi Baskan Rivers). Average height of Toksambai and Tyshkantau ridges is 3770 m, the highest point of the former is 4062 m, and of the latter is 4359 m. Significantly exceeding the level of the snow line, ridges have snow tops and glaciers up to 8 km. There are a lot of branches that go to the west, south-west and north-west from the high snow chains.
Along the skirts of Balkhash Valley there rise south-western ridges of Zhungar Alatau. Western ridges of Zhungar Alatau are mountains of Chulak, Matai, Kalkany and their under-mountain valleys. This is one of the most picturesque places in Kazakhstan. Here one can still meet ibex, mountain beavers – wild sheep, and here the delicate desert gazelle (dzheiran) is breeding. Previously destroyed in the northern deserts koulans were brought here from Barsakelmes peninsula.
Besides, this territory is amazingly rich with ancient monuments: in the mountains there are many rock paintings that require world protection, in the under-mountain valley there are many burial mounds and ritual constructions made of enormous stones.

Central Tien Shan starts at the junction of the state borders of China, Kazakhstan and Kyrgyzstan. The highest point of Kazakhstan is located here. It is Khan-Tengri peak (6995 m).

Khan-Tengri Peak (Master of Spirits), the highest point in Kazakhstan (6995 m), is considered to be one of the most beautiful peaks in Central Tien Shan. Marmoreal top in the shape of the pointed pyramid can be seen almost from everywhere. There are many legends about this mountain from the ancient times. It is also called Tengritau (God’s Mountain) or Kantau (Blood Mountain) for the red colour that the tope gets during the sunset. This is the most northern above-seven-thousand-meters mountain. Khan-Tengri Peak is hard to access, that is why it bears interest for mountain-climbers and for those who like adventurous tourism. The northern part of the mountain belongs to Kazakhstan. Climbing along “Northern Wall of Khan-Tengri” is a cherished dream of many climbers.

There are several ridges going to the west from Khan-Tengri massif. The largest is Terskei Alatau. Along its eastern branch Kazakhstan borders on Kazakhstan.

Ketmen Ridge is separated from Central Tien Shan by the highly raised depression (up to 2300m). Ketmen in the form of the absolute mountain upland stretches to the south from Ili Valley. The highest point is Nebesnaya Mountain (3652 m).

Ile Alatau is the most northern high-mountainous ridge of Tien Shan. It is stretched from the east to the west for 350 km. Ile Alatau is divided into the western, central and eastern parts.

The highest mark in the mountain system is Talgar peak (5017 m). Modern glaciation is widely developed in the central part of the ridge. Vertical profile of Ile Alatau is characterized by the tiered structure. High-mountain tier that has alpine relief shapes differs with its extremely deep ruggedness (area of Talgar peak, Komsomol Peak).

Chu-Ile Mountains go to the north-west from Ile Alatau. These are greatly ruptured ancient mountains, formed with sedimentary and igneous rocks.

Kyrgyz Alatau is located to the west from Kungei Alatau and Ile Alatau. It is separated for them by Boam Gorge of Chu River. Only northern slopes of the western part of the ridge belong to Kazakhstan.

Western Tien Shan on the territory of Kazakhstan starts from Talas Alatau and ridges that branch from it towards south-west. The largest of them are Ugam and Korzhyntau. Talas Alatau comes to Kazakhstan partially, with its western side.

Karatau is located on the territory of Kazakhstan. It is the utmost, greatly ruptured north-western ridge of Tien Shan.

Belukha Mountain (4506 m), the highest peak in Altai and Siberia, is located in the north-east of East Kazakhstan on the border of Kazakhstan and Russia. Slopes of its two-head top are covered with eternal snow and glaciers (Berelsky, Katunsky etc.) on the area of around 70 km2.
Belukha represents an interesting site for alpinism and mountaineering. At the same time it is a holy mountain according to many legends. Buddhists believed that here was the legendary transcendental country of gods, Shambala, and from here great Buddha, Gautama came to India. According to other legends, the energy bridge connects Belukha with Everest. Here is the “hub of the universe” that also has energy connection with the Space; that provides people with energy and health. People who had once seen Belukha would always remember its divine shining two-head top. Belukha is the symbol of Altai.

Turgen ravine is rich with thermal springs, waterfalls, coniferous and mixed forests, alpine and sub-alpine meadows, lakes and springs, medicinal herbs and berries. It goes deep for 44 km to the large plateau of Assa. Turgen ravine is famous for its waterfalls, there are seven of them. Medvezhij waterfall attracts with its 30-meter height amongst the beetling rocks and green spruces. Bozgul waterfall is famous for the powerful water flow that has made a tunnel in the rock. Rocks in the ravine store the marks from the plants of the Pre-Glacial Age. The ravine is famous for its relict Chin-Turgen mossy fir-plantation that prostrate along the land forming compact fir carpet.
The most popular place in the ravine is Botan, hunter station. Here, at the junction of three rivers, Turgen ravine reached the greatest depth – 920 m. Along Asy River there are ancient burial mounds and rock paintings. There are a lot of sak and uisun graves in the ravine. 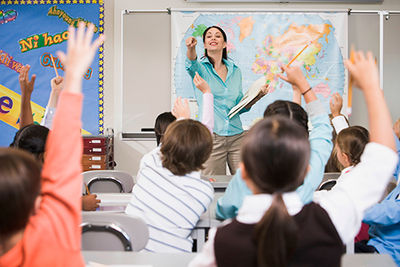 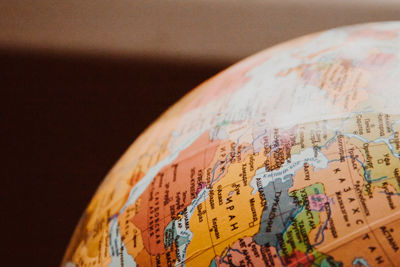 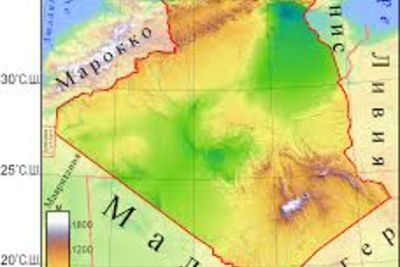