Комментарий к проведению урока по теме “Do you have an example to follow?”

Teacher: There are lots of famous people all over the world. All people know them well. They love and respect those heroes, who did a lot for their nation. And today we will speak about them. The theme of our lesson is “Do you have an example to follow?” Read after me”Tell me and I will forget, show me and I may remember, involve me and I will understand”.This is the epigraphe for the lesson.

- What colour are your mother's eyes?

-Was your grandmother /grandfather tall or small/ ?

- What colour was your mother's/father’s hair?

- Does your father work on the collective farm?

- What is your mother's job? Where does your father work?

A composer, a disigner, a scientist,a doctor, a nurse, a writer, a poet, a playwright, an actor, a politician,an architect,a national hero, a singer, a musician, an artist,a composer, a queen, a prince and princess.

There are people who are widely known in our country. Can you name these names? Y. Gagarin is a famous cosmonaut. Who is the first woman pilot? (V. Tereshkova ). A. Pushkin – (a poet). R. Repin (an artist). Y. Kafelnikov (a famous tennis – player). M. Lomonosov (an out standing scientist) V. Putin (a president, now he is a prime minister).

As you know there are lots of famous people not only in Russia, but in Britain too. They are: R. Baden- powel, H. Nelson, H. Ford, C. Wren, R. Kipling, W. Shakespeare, F. Nightingale, W. Churchil, Princess Diana, C. Darwin, I. Newton. Do you know these names? Why the British are proud of them? How do people honour them?I have prepeared the booklet about the queen of Great Britain Elizabeth II.

You,Vitya will retell us about Arthur Connan Doyle. 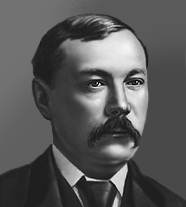 Arthur Connan Doyle is an English writer (1859-1930). He created in his detective literature an image of the detective - fan Sherlock Holmes. The stories «The Dog Baskerwilley" (1901-02), «The Valley of Horror» (1914-15), stories differ by an entertaining intrigue and simplicity of a narration. He has written many historical and scientific - fantastic novels.

Sherlock Holmes, a hero of many compositions of Connan Doyle.He got this name in honour of the writer O. Holmes. The detective - fan resisted to official police. Sh. Holmes became a model for the heroes of many detective stories in the 20 th century. (A. Christy, Simenon). In London there is a "museum - apartment" to Sherlock Holmes. 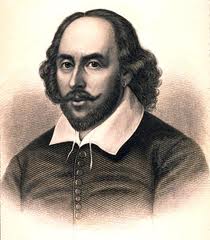 It is your turn to speak about William Shakespeare, Alyona, please.

William Shakespeare was born in Stratford – on –Avon on 23d of April 1616.He was born in the family of the dealer and respectable townsman John Shakespeare.His ancestors were working on the field with growing grain within several centuries. In 1568 was the greatest prosperity of the family, then came crisis and ruins.In 1580 William had to help his father to work and earn some money. Having left school W. Shakespeare leaves from Stratford, in 1582 he married Ann Hataway. In May of the next year their first child Susan was born, in February twins Gamneta and Judit appeared. On a boundary of 1590 Shakespeare comes to London. This year his first play-chronicle “Henry the VII” was created. Poems “Venus and Adonis” (1593) on a myphologic plot, “Lucrecia’(1594) from the Roman history appeared. His “Shakespear’s Canon” included 37 plays. Among his earlyworks we can mention “Taming of obstinate wife” (1593), “Comedy of Mistakes” (1593), ”Dream in summer night” (1596), “Much noise of nothing” (1598). In historical chronicals “Richard III”(1593), “Henry IV”( 1598) and tragedies “Romeo and Juliet”(1595), “Hamlet” (1601), “otello” (1604),”The King Leer”(1605), “Mackbet” (1606), “Julias Ceasar “ (1599), “All is well that ends well” (1603), “Measure for measure” (1604), ”Anthony and Kleopatrs” (1607),”Koriolan” (1607) and lirical “Sonets”(1592 – 1609) His plays were staged in many theatres, translated into many languages and made Shakespeare a very popular man. Shakespeare’s tragedies are examples of tragical in the world of literature. The searches of the optimistic decision of the conflicts have creation of romantic dramas “A Winter Fairytale”(1611), “Thunderstorm” (1612).

Nowadays we know W. Shakespeare as an English playwright, poet and an actor of a royal troupe “Globe”, which was opened in 1599. His saying “All the world is a theatre” was written in Latin (“Totus mundis agit histrionem”). After his death in 1616 his works of the so called “The First Folio” was published. It includes 36 plays. 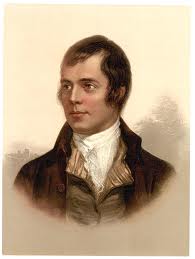 Robert Burns, a well known and popular Scotish poet, was born in 1759.

Burns was born in a poor family of a farmer. There were seven children in it. Robert was the eldest. His father, William Burns, was a farmer and Robert had to help his father. His father loved and understood people and the boylearned from his father to love and honor people. His mother had a very good voice and she often sang songs. She knew many folk-tales and told them to her children. At the age of six Robert Burns went to school, because his father wanted him to be an aducational boy. He was fond of reading and writing. Robert read a lot. His favourite writer was Shakespeare. At the age of 15 he began to write poems. He wrote about people, about everyday things. The heroes of his poems were the heroes of his mother’s stories.

In 1777 the Burns moved to another town. Robert wrote poetry and organized a society of young people, where all kinds of moral, social and political problems were discussed.

In 1784 his father died and Robert had to work on a small farm, but his farm brought him disappointment and misery. In 1791 he had to sell the farm. He became an officer.

The young poet felt the injustice of the world, where the landlords owned the best land. His protest is shown in his poems. Robert published his book “Poems” when he was 27 years old. He wrote about kindness and honesty of common people.

He died at the age of thirty seven in 1796. His poems are known and loved by people all over the world because Robert Burns glorified a human being.

So we have listened about a poet Robert Burns toJane R. 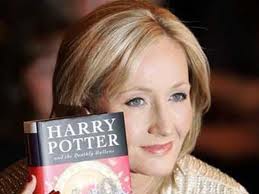 Joana Rowling was born in Chepstow, England, in 1965. Her favourite subjects at school were English and foreign languages. She wrote her first book when she was five. It was about a rabbit and its friends.When she grew up, Joana went to University to study French, and later became a secretary. That job was not for her. After work she thought about interesting plots for her stories.

When she was 26, she left her job and moved to teach English to Portugal. But she never forgot her hobby. In Portugal she met her future husband and they got married. In 1993 her daughter was born. Her marriage wasn’t happy and she left her husband. Rowling returned to the UK. They lived with her daughter Jessica in Edinburgh.

She was unemployed and money was a big problem. At that time she was writing a book, looking after her daughter. She used to take her daughter to different cafes in the city. It was warm there and she could write while her daughter was asleep next to her. 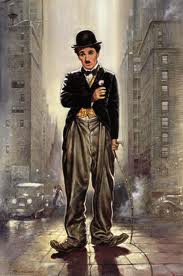 Charles Spencer Chaplin didn’t have a very happy childhood. He was born in London, England, on 16 April 1889, in the family of actor. When his father left the family, Chaplin’s mother didn’t work, and her two sons were often hungry. When their mother got ill, Chaplin and his brother went to the workhouse, which was the place for orphans. Life there was very hard, but Chaplin didn’t give up. He started his career as an actor when he was nine. When he was twenty –one, he joined a travelling music-hall company. He could play comic and tragic personages, laughed at everything which prevents to feel happy. He became world- famous in America after his anticapitalistic and antifashist comedies:”Golden Rush” (1925), “Fires of the big Cities” (1931), “New Times” (1936), “The great Dictator” (1940), “Mesye Verdu” (1947), “The King in New York”(1957), “The Lord from Gonkong” (1967).

The actor died in 1977 but we still remember his “Little Tramp”, a funny little man in baggy trousers and a small bowler hat.He was awarded many prizers, he got a special “Oscar” for his work in the sphere of Art and film industry (1971), the Golden Prize in Film phestival in 1972 and World famous Prize of Peace in 1954. So he was an actor, composer and scenary.

Isaac Newton was one of the most important scientists who ever lived.

He was born on 25 December, 1642, in Woolsthorpe. His father died and his mother remarried. Newton went to live with his grandmother. He went to a grammar school, where he was not a very good pupil. Luckily one of the teachers spotted that he had a bright mind and recommended that he go to university. So Newton went to Trinity College, Cambridge, where he was to study law. One day he went to a fair and bought a book on mathematics. He hadn’t read any books on mathematicsand physics before and got very interested in these subjects. Soon he became one of the best students in the university. He spent most of his life in Cambridge.

Newton became a world-famous physicist, mathematician and natural philosopher. He took facts and mathematical theories and explained them. He formulated laws of universal gravitation and motion that explain how objects move on the Earth and in the sky. He made discoveries in optics and built the first reflecting telescope. He invented an area of mathematics called calculus and wrote a lot of books.

Teacher: Now the task toyou. Say whether the statements are true or false.

Teacher: In the next task you shouldmatch the names of the people and find the information what they were.We spoke about these people last year.

A founder of the South Pole

A founder of Microsoft

A founder of the charity mission

Teacher: In conclusion, I should say that among famous men and women of Great Britain there are many writers. Name them, please. They are: Agata Christie, John Ronald Tolkien, Daniel Defo, Redyard Kipling, Charlotte Bronte, Lewis Carol, James Fenimor Cuper, Jane Ostin, Graham Green, Oscar Wilde, Voinich and others. I am sure that many of you know the main heroesof the English books: Hobbit, Alice ( in Wonderland),Robinson Cruso,Winnie the Pooh, Maugli, Sherlock Holmes, Romeo and Juliet and others.

As for me, my favourite English writers are Margaret Mitchel”Gone with the Wind” and stories by Catherine Cookson and Amanda Quick.

I understand that you have your own idols and models to follow. If you like music, you may like John Lennon- a well known singer, the groap “The Beetles” and others. People respect them, they set an example for their deeds and we are proud of them.

I hope you like the lesson. You have worked well today. Thank you for the lesson.