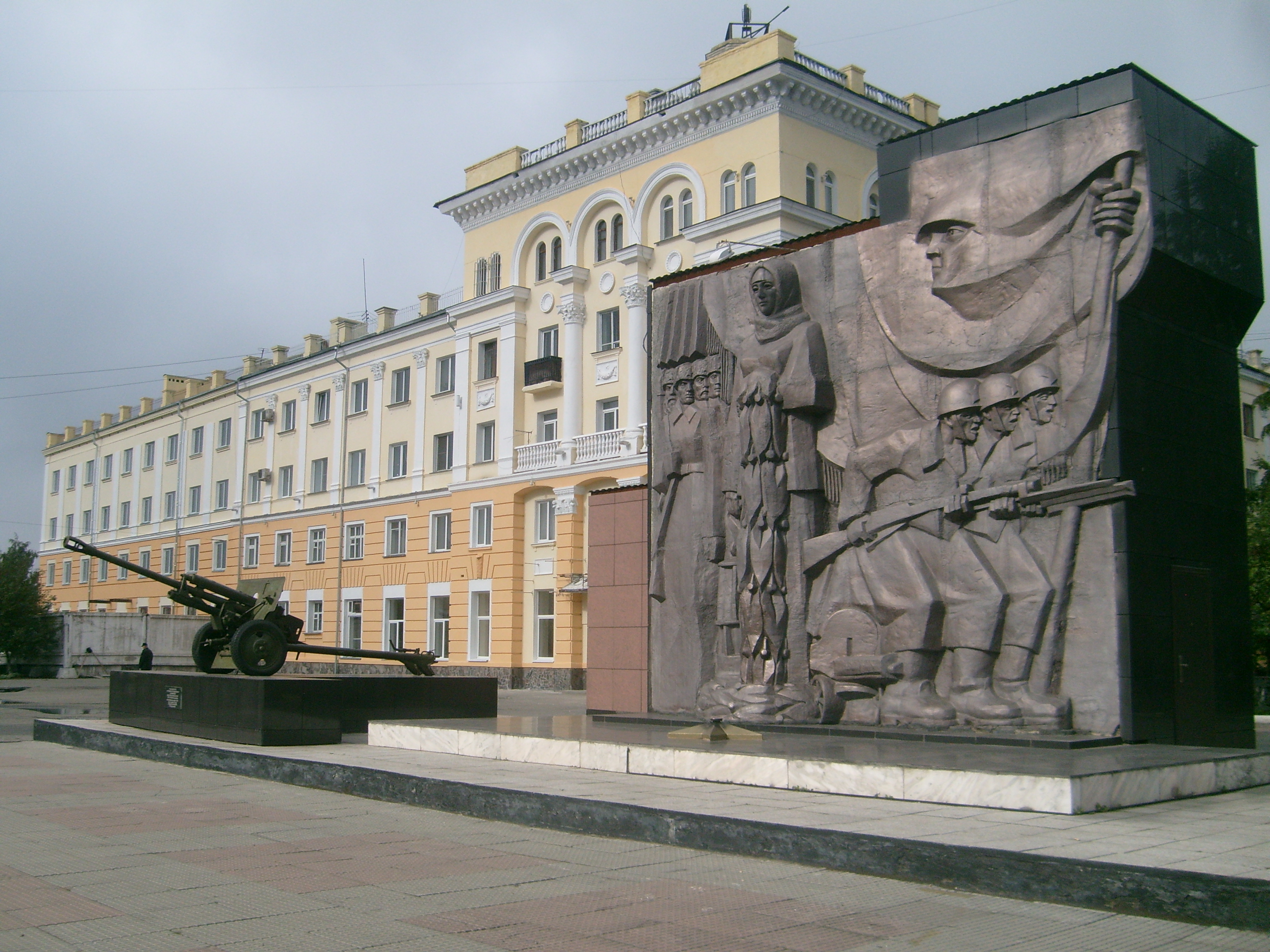 They were named after famous people.

Thousands of citizens defended out Motherland during the World War II.

Many of them didn't come back from the fronts. Many were rewarded with medals and orders. Ten our citizens became the Heroes of the Soviet Union: S.K.Alekseev, S.P. Abramtzev, I.P.Vasiljev, T.I.Vostrikov, P.A.Zvarygin, I.P.Kurenkov, A.E. Pogoreltsev, Z.M.Tusnolobova, P.S.Shakurin, A.P.Schilin. Shilin was twice Hero of the Soviet Union and the bust to him is in Pobeda Square.Their feats of arm are the part of our town's chronicle.

Became the Hero at Berlin

Sergei Konstantinovich Alekseev was born in 1922 in a peasant's family. There were thirteen children in the family. But only three remained alive.

Sergei was six years old when the family moved into Leninsk-Kuznetsky.Soon his father died and he began to work. At first he worked at greengrocery depot, then at Kirov mine. In 1941 he went to the front . His first baptism of fire was near Staraya Russa. During two weeks Siberian men repulsed German attacks. Soon he was wounded and spent two months in the hospital. In 1942 Alekseev finished the school of reconnaissance and for one operation he was rewarded with the medal “For Audacity”.

Рисунок 1.In summer of 1943 took part in operation liberating Orel and Bryansk, then there were front – line roads of the Ukraine, Byelorussia, Poland.

In 1944 he was rewarded with the order of Red Star. In January of 1945 their brigade was the first who came to the Oder. Alekseev's platoon had to reconnoitre the enemy's firing positions. And they did it well. Our tanks defeated the Germans.

A stone's throw was from Shpreya to Berlin. At night, on April 17, 1945 the scout's of Alekseev forced a crossing. There were only ten soldiers. Alekseev was wounded but he continued the battle . In the hospital he knew that he was confered the highest rank - the Hero of the Soviet Union.

After the war he worked a lot.

In February 1994 he died. But Sergei Konstantinovich remained in the memory of many people. 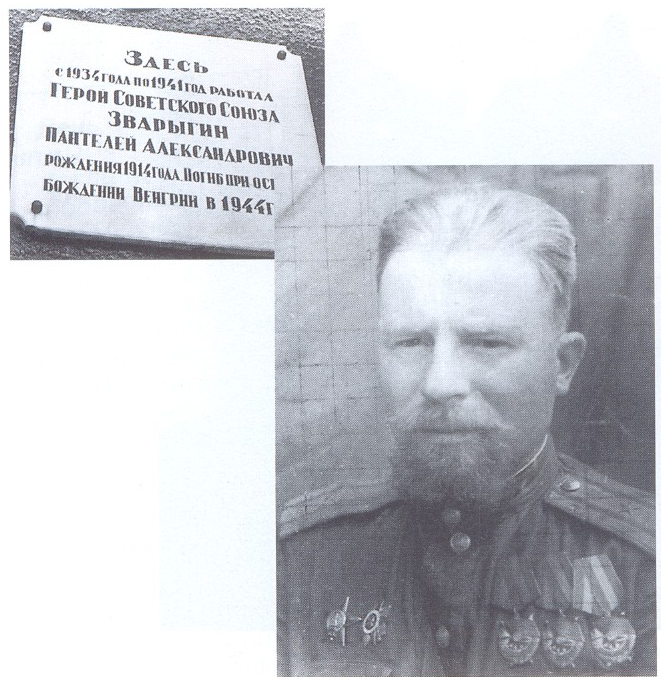 There was Bolshaya Vokzalnaya street in Leninsk-Kuznetsky. Now it is Zvarygin street. On one of the buildings there is a memorial board to P.A. Zvarygin.

Pantelei came to Leninsk-Kuznetsky with his parents when he was sixteen . He wanted to become an engineer. In 1941 he joined the Red Army. During the war he was a commander of platoon and then a company. For courage he was rewarded with Red Star.

In 1944 he had five orders – three of them were the orders of Red Star. In April 1944 major Zvarygin was confered the rank – Hero of the Soviet Union for audacity in Moldavia.

At the end of 1944 he had his last battle. Near Debretsen the soldiers of Zvarygin defeated fascists and planted a flag. At that moment enemy's bullet killed the commander. Zvarygin was buried there. In main square of Debretsen there is a monument to him. In Leninsk-Kuznetsky there is a street named after him.

here is a street in Leninsk-Kuznetsky which everybody knows. It is Vasiljev street.

There Coal – Mining Association was situated. Now in 1, Vasiljev Siberian Coal Energy Company is located. On this building there is a memorial table to Illarion Romanovich Vasiljev, Hero of the Soviet Union.

He was a defender of Moscow. His company struggled near Dubosekovo. Twenty eight soldiers of the general Panfilov defended Volokolamsky road,the road to Moscow. There were thirty enemy's tanks. Twelve soldiers died like heroes at the beginning of the battle. Force were unequal. Vasiljev was wounded but only three men and Vasiljev among them remained alive.

Fascists couldn’t capture Moscow. Vasiljev was confered the title of the Hero of the Soviet Union, the Order of Lenin and the medal “Golden Star”. He died in 1967 but people will remember him for ever. 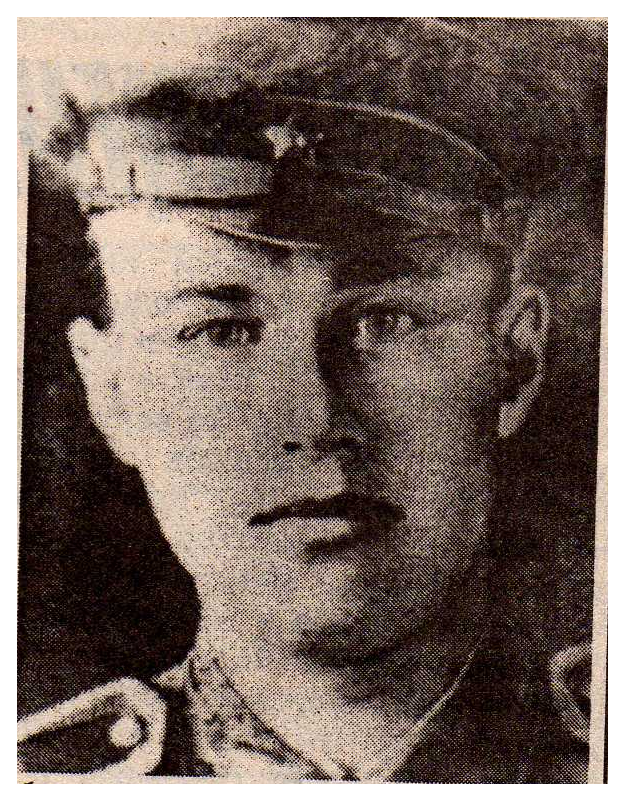 n suburb of Leninsk-Kuznetsky there is a street called in honour of Abramtsev.

Sergei Pavlovish Abramtsev was lost at the end of the war. In 1944 he was confered the title of Hero of the Soviet Union.

He was honest, sociable, cheerful. He was an example to other young people. His war biography began in 1942. Sergei finished tank school and was sent to the first Ukrainian front. He took part in the battles liberating Stalingrad, Donbuss, Dnieper, Ukraine … .

Near Dzhurzhentsy was a great battle. The tank where was Abramtsev annihilated two enemy's tanks, four cannons and many lorries.

ut he was lost.

In Dzhurzhentsy there is a grave and a monument to him. In Leninsk-Kuznetsky there is Abramtzev Street. 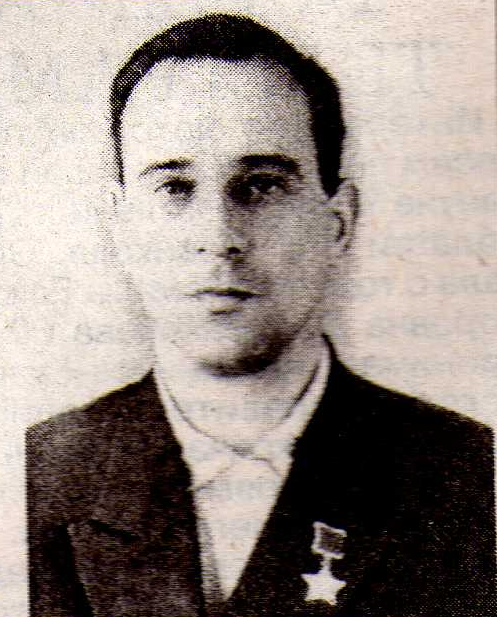 Ivan Kurenkov began to work at Kirov mine a nineteen – year – old boy. He worked well and a lot and that's why had many diplomas. When the World War II began Ivan went to the front. His first baptism of fire he got near Moscow.

Was wounded, rewarded with the Order of Red Banner. Was in hospital and then went to Leningrad.

Then was wounded again. Ivan fought at Kursk, achieved crossing across the Desna, forced a crossing over a river Dnieper.

In 1943 Kurenkov was rewarded with the Order of Lenin, the medal Golden Star and was confered the tittle -the Hero of the Soviet Union. 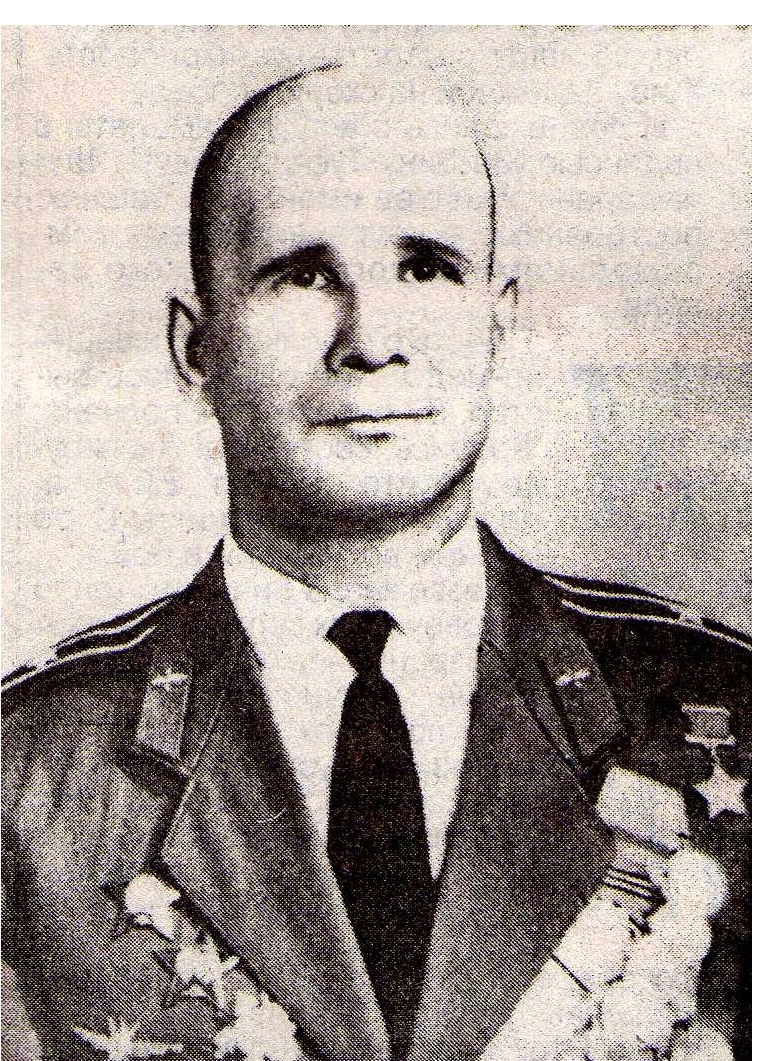 One of our Heroes of the Soviet Union is Pyetr Stepanovich Shakurin.

He was born in Baikaim and worked in printing – house. In 1938 he finished aero club and joined the Red Army. The Great Patriotic war began when Pyetr studied at Novosibirsk Pilot school. He was at the front from 1943 taking part in war operations at Kalinin, Voronezh, Stepnoy, Ukrainian fronts. His assault – plane routed fascists at Kharkov, Kishinev and other cities and towns.

There were legends about Shakurin. His plane appeared when fascists didn't wait for him.

In 1943 with the group of planes he defeated eight tanks, twelve enemy lorries.

During the war Pyetr Shakurin made 175 successful flights, destroyed twenty tanks, seventy lorries with enemies, a lot of carriages with ammunition.

In 1945 Shakurin was rewarded with the tittle of Hero of the Soviet Union.

Besides he was rewarded with three orders of Red Banner, order of Red Star, order of A. Nevskiy.

After the war major Shakurin continued to serve in the army.

In 1959 he returned to Novosibirsk and began to work at the institute. In 1984 he died and was buried in Novosibirsk in Zaeltzov cemetery. 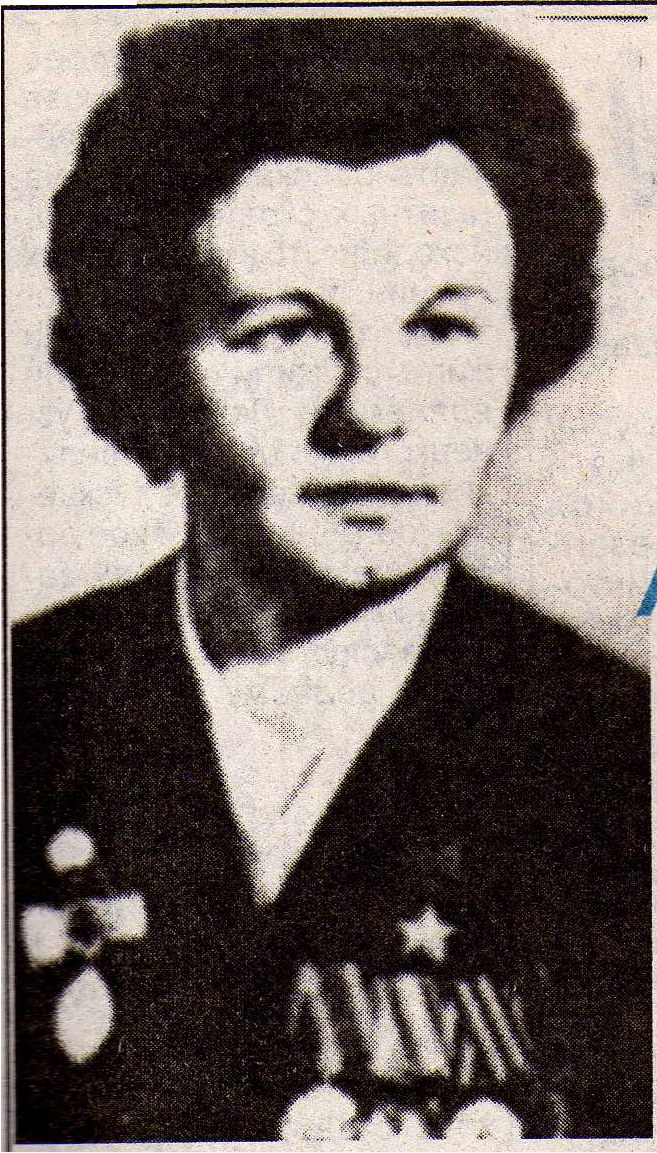 usnolobova Street is one of the oldest in our town. It is called in honour of Zinaida Tusnolobova.

When the World War II began she went to the front but at first she finished medical courses. Her first baptism of fire Zina got at Voronezh.

It was in 1942. Under intensive fire she saved forty wounded soldiers.

In February 1943 was a great battle near Gorshechnaya station.

Zina was wounded in both legs . She spent in the snow two days. When she was found by scouts Zina got her hands and legs frost bitten. She was made eight operations and remained without legs and hands.

Zina returned Leninsk-Kuznetsky on artificial limbs and began to work.

In 1957 Zina was confered the rank – Hero of the Soviet Union. In 1965 she was rewarded with the platinum medal by Florens Nightingale.

In Polotsk there is a monument to a girl in a war uniform with the first – aid bag.

Among our Heroes of the Soviet Union there are some about whom we didn't often hear because after the war they lived far from Leninsk-Kuznetsky. But they brought fame to our town.

After the war Pogoreltzev lived in Leningrad region and worked in a mechanical plant. In 1978 he died. Our town is proud of him and the citizens remember Alexander Pogoreltzev. 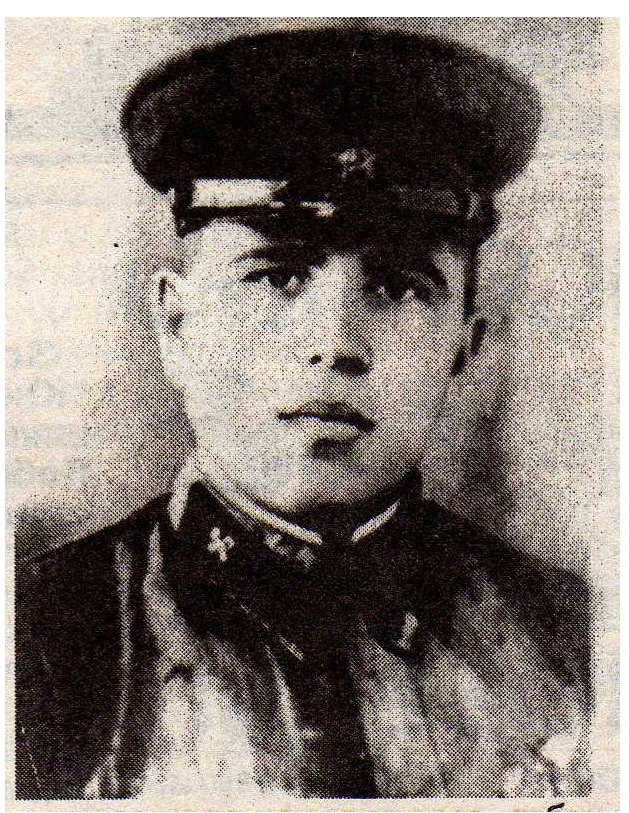 Vostrikov street is in the western part of our town.

When Timofei was a little boy the street was dirty with old houses. Now it is a nice and clean street. Timofei couldn't imagine that this street would be called in his honour. It was in 1965. But he didn't know about it because he was lost at Kursk.

There was a great battle. It lasted for four hours.

Vostrikov's men destroyed five tanks and killed a lot of fascists. Timofei was wounded but he destroyed two tanks more.

Not long after that he was killed. Vostrikov was buried in the village near Kursk. In 1943 Vostrikov was confered the rank – Hero of the Soviet Union posthumously.

Local schoolchildren found the place where he was killed.

And there is a monument to him there. 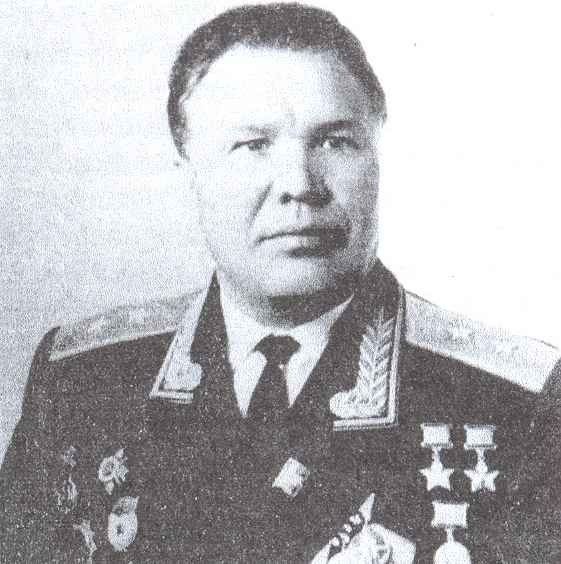 n autumn of 1943 Russian soldiers began to force the Dnieper.

A nineteen – year – old lieutenant Afanasiy Shilin took part in it. There was a very difficult situation on one of the bases and Afanasiy went there with transmitting and receiving set. He caused fire on himself.

When he was found Afanasiy was full of shell – splinters but alive.

For this feat of arms Shilin was confered the rank –Hero of the Soviet Union.

In January 1945 Afanasiy was seriously wounded but he threw

grenades into the gun-port and gave opportunity to stop the enemy. 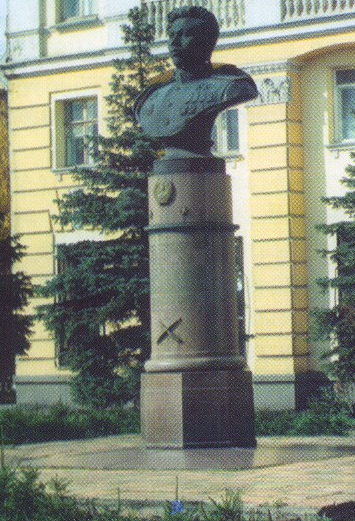 e went to Moscow from the hospital and there he learnt that he was confered the rank –twice Hero of the Soviet Union .

Afanasiy was a military man up to the end of his life. He visited many schools of our town and told pupils about the war. In the centre of Leninsk- Kusnetsky there is a monument to him.

Glory to the victorious soldiers of the Great Patriotic War !